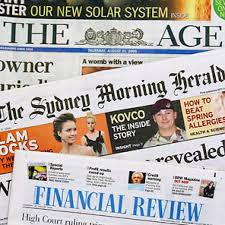 Investigative journalists are justice crusaders. But they’re in danger of becoming victims of traditional media’s decline. And if it happens, one of democracy’s pillars will be weaker. Sydney Morning Herald journalist Kate McClymont is one of those crusaders. Her work led to the jailing of two former New South Wales Labor government ministers.

Ian Macdonald was found guilty in March of misconduct in public office. He was jailed yesterday for 10 years. He cannot apply for parole for seven years. Macdonald’s cabinet colleague and friend, Eddie Obeid, is serving a five-year jail term. Corruption was also the reason for his downfall.

Monash University media academic Ben Eltham has a solution, albeit controversial. His idea is for Australia but it is applicable elsewhere. He advocates taxing Google and Facebook 25 percent of their domestic advertising revenue. The money would fund quality journalism. The multi-national digital giants must be responsible to those who buy their advertising. Some journalists have started news-sites and are continuing their important work. And there are news sites not owned by traditional media.

The Conversation is an international success linking academic expertise to a mainstream audience. The most powerful nation on earth’s leader is incapable of the doing the job. The need for those in public office to be held to account is greater than ever. Investigative journalists are needed more than ever. Ben Eltham’s idea should be trialled. In the meantime, support the great work independent journalists are doing online. By doing so you’re supporting democracy. Among Australia’s sites are: