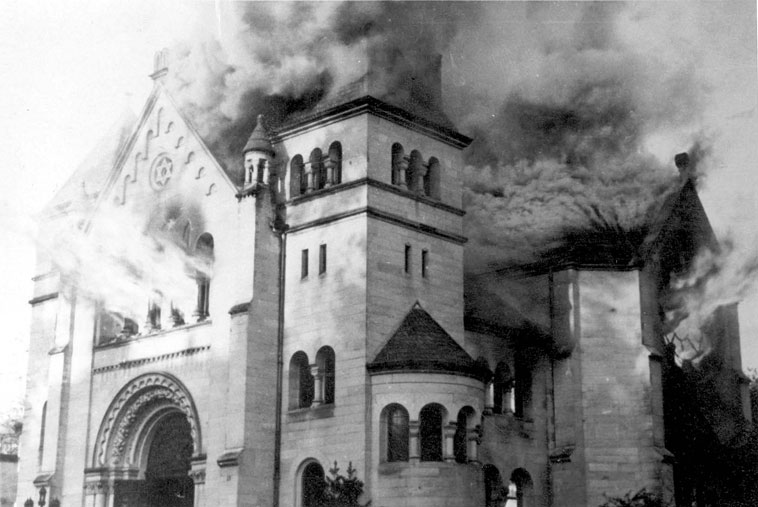 The violence against Jewish people in Germany on 8 and 9 November 1938 was an omen of annihilation. What became known as Kristallnacht (Night of Broken Crystal) wasn’t the first European Jewish pogrom. But it was the first that was not only sanctioned by the government of an advanced industrialized country but unleashed and abetted by it.

The toll of destruction was high. Consistent estimates of damage and deaths varies; the most common is 91 deaths, several hundred synagogues and 7500 windows of Jewish businesses were smashed. About 30,000 Jewish men were arrested. Police and firefighters did nothing as angry mobs attacked Jewish homes and businesses.

The catalyst for this frightening outburst was the assassination of an official at the German embassy in Paris. Ernst vom Rath was shot by 17-year-old Polish Jew Herschel Grynszpan on 7 November 1938. The 29-year-old died two days later. There are conflicting opinions about the reason for the murder.

One view is it was an revenge killing. Grynszpan’s parents were among the thousands of Polish Jews expelled a few days before from Germany where they had been residents since 1911. The expelled Polish Jews were initially denied entry into their native Poland. They were stranded in a refugee camp near Zbaszyn on the Polish/German border. Grynszpan was illegally living in Paris. Vom Rath was assigned to assist him.

Another view is it was a jealous lover’s revenge. Historian Hans-Jürgen Döscher argues Vom Rath and Grynszpan were lovers. Vom Rath went back on his word to arrange papers for Grynszpan to legitimise his residency. A 2013 biography of Grynszpan claimed he was prepared to testify he and Vom Rath were lovers which would not have suited the Nazi’s anti-gay propaganda narrative. Aryans such as Vom Rath were not meant to be gay.

Vom Rath died at 4:25pm. Hitler was told in the early evening. He was at the anniversary of the failed Munich Beer Hall putsch. Hitler left after dinner without making his scheduled speech. Goebbels spoke instead. He announced Vom Rath’s death and went on an anti-Semitic tirade. It was intended to incite a popular uprising against Jewish people but the intent was initially lost and storm troopers took to the streets in Munich. The violence was repeated throughout Germany with ordinary citizens joining in.

Germany’s population of 60 million showed indifference to the outrage, the motivation for which could have been fear of the consequences of doing anything else. Outside Germany the country was condemned. The United States permanently recalled its ambassador. Commentators in the United States declared the night an act of barbarism not seen since the pogroms of the Middle Ages. Support among pro-Nazis in the West dissipated.

Kristallnacht was the latest in the attempt to incrementally destroy the Jewish people and their culture. That November night of horror was an omen of what was to come.

Kristallnacht’s anniversary is an important reminder of what can happen when governments and political parties seek to divide rather than unite people; when groups of people are singled out for blame; when a group of people are belittled. That’s why we should never forget what happened to the Jewish people. We must be forever vigilant to prevent such unspeakable crimes happening again.