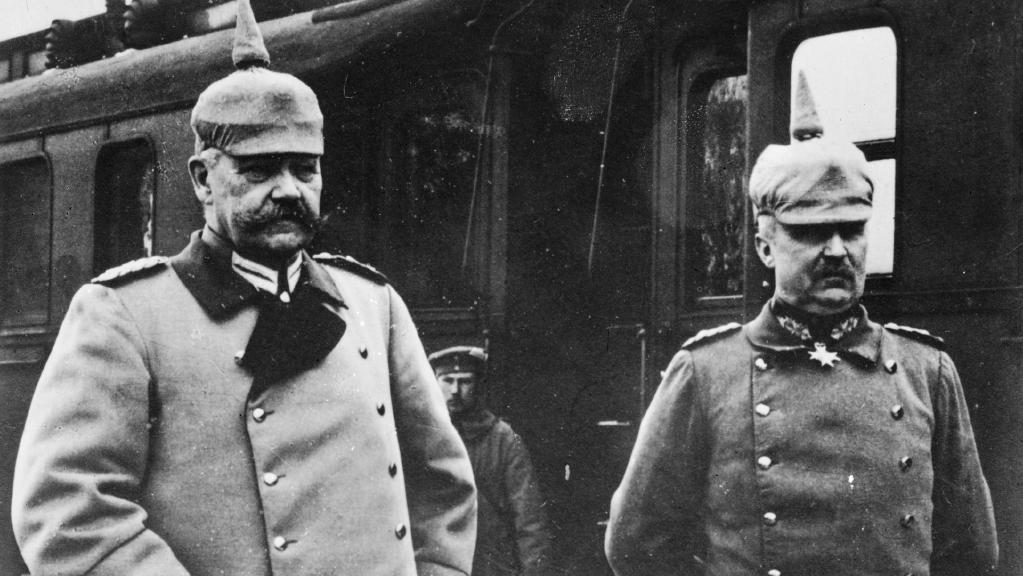 German World War I leaders knew the conflict was lost by September 1918. The spring offensive had failed and the entry of the United States on the Allied side made German victory almost impossible. The war had been led and managed by a military-industrial dictatorship called the ‘Third Supreme Council’. It comprised Field Marshall Paul von Hindenburg, above left, and his deputy, Erich Ludendorff, supported by senior army officers and prominent industrialists. They returned power to the German parliament, the Reichstag, on 29 September 1918.

Ludendorff told German Foreign Minister Paul von Hintze a ceasefire had to be negotiated immediately because the western front could collapse at any moment. Ludendorff wanted the transfer of power from the Council to the major parties in the Reichstag (the Social Democratic Party, the Centre Party and Progress Party). The politicians accepted the responsibility which meant the peace negotiations would be done in their name. They would negotiate the peace for a war lost by the military commanders. They would become responsible for a result to which they had no control or influence.

The military avoided blame. Ludendorff left Germany in October 1918 and wrote several books about the war and propagated the “stab in the back” theory in which the military and German people were let down by the politicians. The Weimar Republic parliamentary democracy was established in 1918-1919. The republic’s opponents, particularly the Nazis, made much of the stab in the back. Hitler called those who negotiated the armistice as the November Criminals.