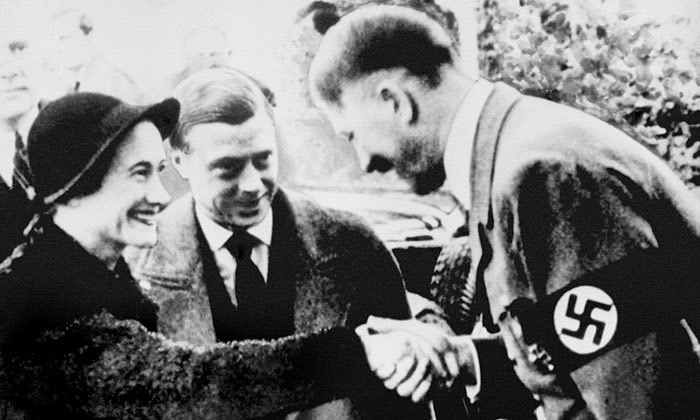 Eighty years ago this weekend, the uncrowned British King Edward VIII abdicated.  “I have made this, the most serious decision of my life, only upon the single thought of what would, in the end, be best for all,” he said in a radio broadcast on 10 December 1936.

It was the best decision for all but not for the reasons he thought.

“I have found it impossible to carry the heavy burden of responsibility and to discharge my duties as King as I would wish to do without the help and support of the woman I love.” The world owes Wallis Simpson a lot.

The man who would’ve been King during World War II may have been a Nazi sympathiser. Authors Andrew Morton in 17 Carnations and Charles Higham in Wallis: Secret Lives of the Duchess of Windsor make the case. But there isn’t agreement about the extent of his support. Book reviewer Paul Foot questions it in his Secret Lives review. In 1930s Britain the people and many politicians, including Prime Ministers Baldwin and Chamberlain, wanted to avoid war with Germany. And there was support for the Nazi regime among the upper class who saw it as a bulwark against the rising Communist threat.

Edward and Wallis visited Germany in October 1937. The British government advised against the visit. The trip was ostensibly to give Edward the opportunity to look at how the German government was dealing with housing, an issue in which he was interested when King. But it was more likely it was to satisfy his vanity, self -importance and to have Wallis treated like a Queen. Hitler and the Nazis acquiesced. The Windsors gave the fascists a great propaganda coup. The visit and Edward’s Nazi sympathies at best show a lack of judgement; at worst, he was a supporter and even potential traitor, which Morton claims. Either way, we should be thankful he was never King. His brother, King George VI, was a much-loved and effective head of state at the time of Britain’s greatest crisis.