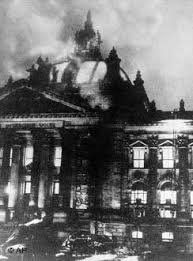 Imagine the Capital building in Washington on fire. Or Westminster in London. Or Parliament House in Ottowa or Canberra. Imagine the enormity of it. Germans waking up on 28 February 1933 didn’t have to imagine it.

The Reichstag was on fire. That was the message the Berlin Fire Department received at 9pm on Monday, 27 February. The attack on the legislature was a powerful symbolic statement, an act of terror.

The Nazis had the most to gain from the atrocity and are thought to have been the instigators and executors; see here, here and here. There are good reasons to believe it.

Scare the electorate and it will unite, has been a strategy politicians have long used. Reichstag President and senior Nazi, Hermann Göring said in 1946: ”Voice or no voice, the people can always be brought to the bidding of the leaders. That is easy. All you have to do is tell them they are being attacked and denounce the pacifists for lack of patriotism and exposing the country to danger. It works the same way in any country.” The Nazis portrayed the fire as a Communist attack. Hitler had been the Chancellor for 28 days. There was to be an election on Sunday, 5 March at which the Nazi vote increased from 37 percent at the last election on 31 July to 44 percent.

It is likely the fire and its aftermath won votes for the Nazis. But they might not have lit the fire. That’s the opinion of The Holocaust Memorial Museum, the eminent historian Richard J Evans and others.

The fire started in the legislature’s debating chamber that took 90 minutes to extinguish. The building was destroyed. It took less than 24 hours for another blow to be struck that ultimately destroyed democracy.

The Reichstag Fire was instrumental in creating a dictatorship in Germany. The declaration by President Hindenburg of the Protection of the People and State (“Reichstag Fire Decree”) the day after the fire was the first of three incontrovertible actions that ensconced Hitler in power. The other two were the Enabling Act (Law to Remove the Distress of the People and the State) of 23 March 1933 and the Night of the Long Knives from 30 June to 2 July 1934.

The Nazis used the fire to justify the removal of more civil liberties that began in Hitler’s first week as Chancellor. A Decree for the Protection of the German People was enacted on 4 February, 1933. It put restrictions on the media and empowered police to ban political meetings and marches. It hindered campaigning for the 5 March election. The 28 February decree imposed more restrictions.

Hitler was having dinner with Propaganda Minister Josef Goebbels when the telephone call came with the news the Reichstag was on fire. Goebbels didn’t believe it and didn’t tell Hitler. It wasn’t until the caller rang again that he was persuaded. The pair sped to the scene. There they found Göring who, as Minister of the Interior for Prussia, was responsible for police and emergency services. There was a rumour an underground passage linked his Berlin house to the Reichstag.

The Nazi leaders were in “state of panic” at the fire scene which is not consistent with knowing about the fire before it started. The next day, the Preussische Pressedienst (Prussian Press Service) reported that “this act of incendiarism is the most monstrous act of terrorism carried out by Bolshevism in Germany”. The Vossische Zeitung newspaper warned its readers “the government is of the opinion that the situation is such that a danger to the state and nation existed and still exists”.

They would’ve primed the populace for the decree announced the day after the fire by President Hindenburg. The Protection of the People and State (“Reichstag Fire Decree”) 1933:

Given the haste with which the decree was prepared and implemented, it was likely it was ready and waiting for an excuse to use it. 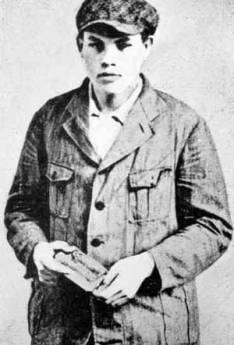 An unemployed Dutch bricklayer and Communist sympathiser, 24-year-old Marinus van der Lubbe, above, was arrested at the scene. He had firelighters and other incriminating evidence in his possession.

Four Communists were charged along with van der Lubbe: Central Europe Section of the Communist International head Georgi Dimitrov, chair of the German Communist Party in the Reichstag, Ernst Torgler and two Bulgarian colleagues. Van der Lubbe admitted starting the fire. It is worth keeping in mind the unemployment rate at the time was about 30 percent. In March, 1933 van der Lubbe said: ”In my opinion something absolutely had to be done in protest against this system. Since the workers would do nothing, I had to do something myself. I considered arson a suitable method. I did not wish to harm private people but something belonging to the system itself. I decided on the Reichstag. As to the question of whether I acted alone, I declare emphatically that this was the case.” His first attempt to light a fire didn’t work. He took his shirt off, lit it and went to five rooms.

The trial judges were led by a former minister-president of Saxony, a conservative, but not a Nazi, Wilhelm Bünger. The trial began at 8:45am on 21 September 1933. Van der Lubbe gave evidence first. He had injured one of his eyes and so had sight in only one which gave credence to the claim he did not act alone.  Van der Lubbe had been a member of the Dutch Communist party but left in 1931. He still considered himself a Communist.

Dimitrov used his court appearance to propagate his views. He declined a court-appointed lawyer and defended himself.  When the lead judge, Wilhelm Bünger, told Dimitrov to behave himself, the accused replied: “Herr President, if you were a man as innocent as myself and you had passed seven months in prison, five of them in chains night and day, you would understand it if one perhaps becomes a little strained.” Dimitrov’s defence was so effective he reduced Göring to rage. Part of the trial transcript is here and worth reading. The trial was just as much a propaganda battle as one for justice.

Bünger found the “Communists had planned the fire, but dismissed the charges against Torgler and the three Bulgarians on the grounds of insufficient evidence“.

Van der Lubbe was found guilty. He was executed on 10 January 1934.

But doubt about his guilt has persisted. He was posthumously pardoned in 2008 after numerous legal battles.

Debate about who started the fire has persisted. Richard J Evans’s has raised these questions and observations about the fire:

The fire’s origins are an intriguing story. The consequential further curtailment of Germans’ civil liberties included a new court. Hitler was so outraged at the result of the Reichstag Fire trial he established the People’s Court that would give the judgements he wanted. The court opened on 1 July 1934. It had jurisdiction over a wide range of offences including black racketeering, work slowdowns, defeatism, and treason. The death penalty was the usual punishment for these crimes. There was no presumption of innocence, defendants could not represent themselves or by a lawyer. Defence lawyers were in court but rarely spoke. There were prosecutors but most of the questions were asked by the judge.

Out of the ruin of the Reichstag came the building of a despotic, despicable dictatorship.