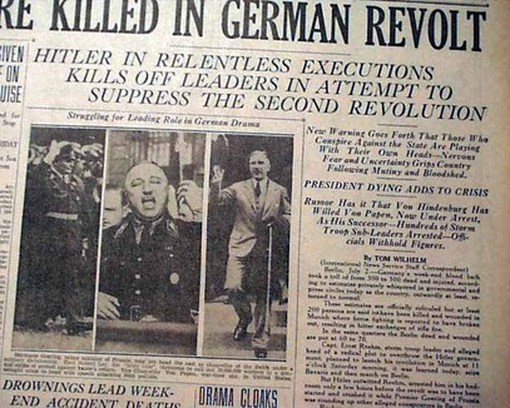 Germans got a prelude to the madness in store for them on 29 June 1934. Between 6am and 7am that morning, the Chancellor, Adolf Hitler, weapon drawn, charged up the stairs of the Hanselbauer Hotel in Bad Wiessee. His quarry: the head of the Nazi party’s paramilitary storm troopers, Ernst Röhm and his suspected co-conspirators. The Chancellor of Germany is the head of government, the equivalent of the Prime Minister of Great Britain, Canada and Australia. An armed Theresa May, Justin Trudeau or Malcolm Turnbull charging up the stairs of a hotel with murder on their mind is incomprehensible.

But it was comprehensible in Germany in the summer of 1934. The tinderbox state of the Germany polity throughout 1932 persisted, despite Hitler’s ascension to the Chancellorship on 30 January 1933. Germany’s transformation from a model democracy to a detestable tyranny happened in three stages. The final – the bloodiest, and a portend of things to come – was what Hitler himself called the Night of the Long Knives. The second stage was the passing of the Enabling Act on 23 March 1933; the first was Hitler’s ascension to the Chancellorship on 30 January 1933.

By the time the Night of the Long Knives – also known as Operation Hummingbird or the Röhm-Putsch – ended, between 150 and 200 people had been murdered. The contributing causal factors:

Hitler feared he would be overthrown. To prevent it, he divided and ruled. He encouraged his most powerful lieutenants to compete with each other. They were the President of the Reichstag, Minister for Prussia, and Minister for Aviation, Hermann Göring; Minister for Propaganda, Joseph Goebbels; head of the paramilitary SS, Heinrich Himmler; and head of the SA, Röhm. Despite the competition among each other, Göring, Goebbels and Himmler were united in their hatred of Röhm. He had a long-standing friendship with Hitler. He had persuaded the army to give money to the Nazis in the party’s early days. It’s unlikely the party would have become established without the money. And Röhm was instrumental in debilitating the opposition in the elections of 1932 and 1933. Besides the personal connection to Hitler, Röhm had the potential to get rid of his opponents and was far more powerful than them by virtue of the three million stormtroopers he commanded.

Göring and Himmler asked one of Himmler’s stooges, Reinhard Heydrich, to assemble a dossier on Röhm. Heydrich made up evidence that suggested the French had paid Röhm 12 million marks to overthrow Hitler.

At about this time, the third factor – powerful interests –intensified their efforts. One of those interests was the army, Reichswehr.  The Treaty of Versailles, the settlement that ended the Great War, limited the army to 100,000 men but its leadership, dominated by proud aristocratic Prussians, wanted to expand. Röhm had made it known he thought the Reichswehr was “antiquated”. He talked about the second wave of the Nazi revolution in which the Reichswehr would be absorbed into the SA to become the “people’s army”.

Other powerful interests were industrialists. Albert Voegler, Gustav Krupp, Alfried Krupp, Fritz Thyssen, and Emile Kirdorf had funded the Nazi victory. They opposed Röhm’s socialist views and his talk of another revolution. And they disapproved of homosexuality. Röhm and many other SA leaders were gay. Gay storm troopers terrorised and arrested gay men. The hypocrisy is stupefying.

The fourth factor was not intentional. The  contribution of hapless diletante deputy Chancellor and confidante of President Hindenburg, Franz von Papen, below,  was unwitting.

Papen warned against revolutionary ferment in a speech at the University of Marburg just 12 days before the Night of the Long Knives. The speech was drafted by one of Papen’s close advisors, Edgar Julius Jung, who was helped by Papen’s secretary Herbert von Bose and another staffer, Erich Klausener. The short-term consequences were fatal, though not for the unprincipled aristocrat; in the long-term it worked in his favour.

Hitler was furious when he heard about the speech and asked Goebbels to suppress it. Despite the propaganda minister’s efforts, the speech was reported by some German and foreign media. Papen told Hitler he was speaking as a “trustee” of President Hindenburg but resigned anyway. The ailing 86-year-old president – who detested Hitler – was enraged when he found out about Papen’s resignation. Hindenburg gave Hitler an ultimatum: end the disorder or be replaced by an army representative. 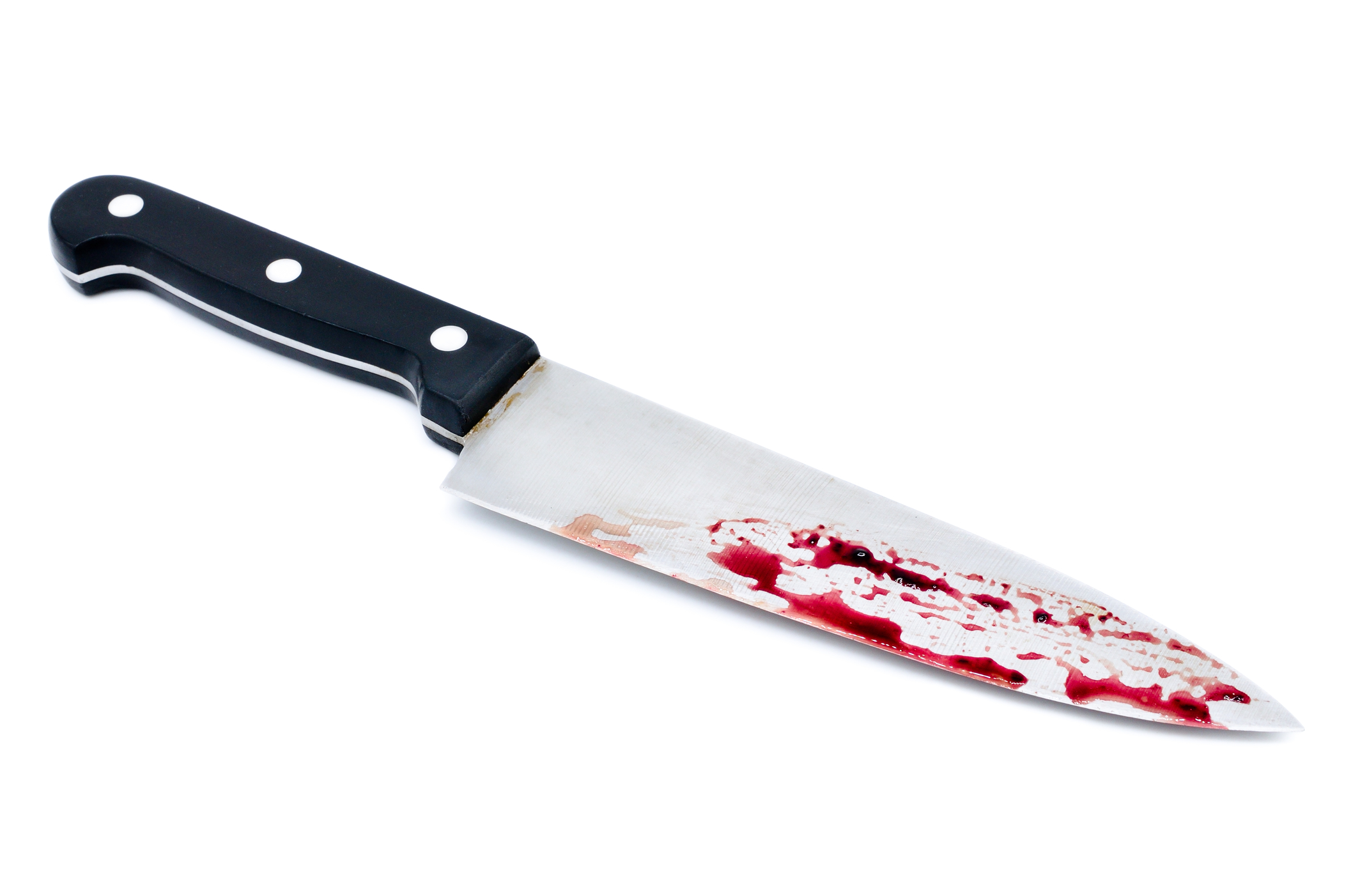 Jung, Bose and Klausener were murdered during the Night of the Long Knives. Papen was arrested but released on 3 July. On 26 July, he accepted the appointment by Hitler – his associates’ indirect murderer – of Ambassador to Austria. Papen served in diplomatic positions until Germany’s defeat. He was tried at Nuremberg and found not guilty of war crimes. But the Tribunal’s words are worth quoting: “The Charter does not make criminal such offences against political morality, however bad these may be.”

The Nazis spun the murderous purge as the successful prevention of a coup. In a radio broadcast on 2 July he said Hitler had narrowly prevented Röhm and Schleicher, Hitler’s immediate predecessor as chancellor, from overthrowing the government. Hitler wanted to make sure the purge was legally sanctioned. On 3 July cabinet approved: “The measures taken on June 30, July 1 and 2 to suppress treasonous assaults are legal as acts of self-defence by the State.”

On 13 July, Hitler justified the purge in a nationally broadcast speech to the Reichstag in which he confirmed he was judge, jury and executioner. He said 68 stormtroopers were killed, three suicided.

“If anyone reproaches me and asks why I did not resort to the regular courts of justice, then all I can say is this. In this hour, I was responsible for the fate of the German people, and thereby I became the supreme judge of the German people. I gave the order to shoot the ringleaders in this treason, and I further gave the order to cauterise down to the raw flesh the ulcers of this poisoning of the wells in our domestic life. Let the nation know that its existence – which depends on its internal order and security – cannot be threatened with impunity by anyone! And let it be known for all time to come that if anyone raises his hand to strike the State, then certain death is his lot.”

And so it was.

Hitler’s takeover of the President’s role was a formality after Hindenburg died on 2 August 1934. Nothing stood in his way. Later that year, Hitler’s power was reinforced further. The Defence Minister, Werner von Blomberg, changed the oath of allegiance from country and people to Hitler. The change was apparently not imposed by Hitler who was surprised by it. Blomberg’s intent was to strengthen the bond between Hitler and the military and away from the Nazi Party. Blomberg later admitted that he didn’t consider the oath’s long-term consequences. No doubt people like Papen were thinking the same thing about their actions in 1932 when they failed to stop Hitler gaining power. But it was too late. Hitler’s mission of attaining absolute power was accomplished.